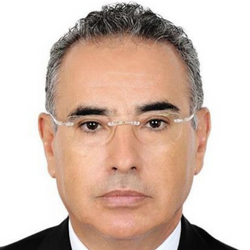 In the course of his UN Career, Mr Friji has also served as a Spokesman and media advisor on several occasions such as Spokesperson and media advisor to the UN Special Envoy for Western Sahara, Peter Von Walsum during his first visits to Morocco, Algeria, Mauritania, Polisario Headquarters, Spain and France before reporting to the Security Council (2005-2006), Spokesman and media adviser of the UN Envoy for the implementation of Security Council resolution 1559, Terje Rod-Larsen who supervised the withdrawal of the Israeli army from South Lebanon (2000) as well as the pull out of the Syrian armed  forces from Lebanon (2005), and Spokesman for the United Nations during the war in Iraq, heading the UN daily briefing in Amman, Jordan (2003) to name a few.

In 2004, Mr Friji served as Spokesman and political adviser to the UN SRSG in Iraq.

While serving as the spokesman of the UN Envoy to Yemen, Mr Lakhdar Brahimi, he was tasked to establish the first UN Information Centre (UNIC) in Sanaa, Yemen and subsequently served as the Director of the center from 1994-1998.

He was then appointed Director of the UNIC Beirut, serving Lebanon, Syria, Jordan, Kuwait and the UN Economic and Social Commission for Western Asia (ESCWA) from 1998-2006 before taking charge of the UNIC in Manama, Bahrain that covers the GCC countries.

In 1989, Mr Friji started his career with the United Nations as the UN Information Officer at the UN Headquarters, New York, USA where he worked in the Media Coverage Section of the UN Department of Public Information (DPI).  Mr Friji was responsible for issuing press releases in French on the general debate of General Assembly and the deliberations of its subsidiary committees (political, social, decolonization, legal, peace and security, cooperation and development, disarmament) in addition to the Security Council and the UNGA sessions, summits and meetings.

Mr Friji began his career in the year 1982 as a journalist based in Brussels covering the European Union, The North Atlantic Alliance (NATO) and Belgium for the international daily AL QABAS, the Weekly Arabic AL YOM ASSABAA, the Tunisian Arabic daily ASSABAH, the French weekly JEUNE AFRIQUE, BBC French Service, Radio France Internationale, The Arabic Service of the German Radio Deutsche Welle, The Dutch radio HILVERSUM.  Mr Friji holds a degree in Master Studies in English Political and Social Studies of the English speaking countries from the New Castle University in UK and a BA in Political Science in English from the University of Paris.  On 2019, late Tunisian President Beji Caid Essebsi nominated Mr. Friji for the decoration of the National Diplomatic Distinction Award that was bestowed to him by Interim President Mohamed Ennaceur on 2 August, 2019.