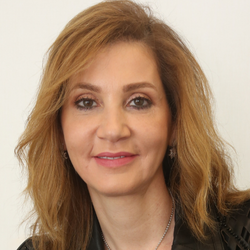 Dima Jamali is currently serving as Dean of the College of Business Administration at the University of Sharjah, UAE.

She has an amazing academic career, having been in academia for over 20 years, primarily at the American University of Beirut (AUB), where she served as Tenured Professor and Associate Dean for the Olayan School of Business (OSB) and Director for Strategic Partnerships for the University. She made her way fast track through the ranks to Full Professor in 2010 and Endowed Chair in Responsible Leadership in 2014. Starting in 2015, she has founded and served as President and National Representative for the UN Global Compact Network Lebanon (GCNL), a network of businesses committed to advancing Sustainability and the Sustainable Development Goals (SDGs) in Lebanon. She has a PhD in Social Policy and Administration, from the University of Kent at Canterbury, UK, a Masters in Sociology from San Jose State University, CA and a BA in Public Administration from AUB, Lebanon. Her research and teaching revolve primarily around Sustainability, Corporate Social Responsibility (CSR) and Social Entrepreneurship (SE) and Family Business. She is the author/editor of seven books (CSR in the Middle East – Palgrave, 2012; Social Entrepreneurship in the Middle East – Palgrave, 2015; Development Oriented CSR – Greenleaf, 2015; Comparative Perspectives on Global Corporate Social Responsibility – IGI- 2016; Handbook of Responsible Management – Edward Elgar 2019; CSR in Developing and Emerging Economies: Institutions and Sustainable Development – Cambridge University Press 2019 and Corporate Governance in Arab Countries: Specifics and Outlooks, NTER Press 2019) and over 100 international publications, which are highly circulated and cited on an international scale.

Dr. Jamali recently made it to the Stanford list of the top 2% most influential scholars globally for two consecutive years being recognized as a unique and highly ranked talent in her field. She was also ranked as top 30 scientist in the UAE in 2022. She is the winner of the 2016 National Council for Scientific Research Excellence Award, and the 2015 Aspen Institute Faculty Pioneer Award, dubbed by the Financial Times as “the Oscars of the Business School World” for pioneering faculty who are at the cutting edge of teaching and scholarship in their field. She is also winner of the Shield of Excellence for the Arab Region and designated as Personality of the Year for CSR by the Arab Organization for Social Responsibility in 2015. She is also winner of the 2010 Shoman Prize for best young Arab researcher, which recognizes distinctive scientific works that contribute to addressing priority issues at the local, regional and international levels. In 2013, Dr. Jamali was selected for the Eisenhower Fellows Program, joining a global network of leading professionals committed to

collaborate for a more prosperous, just and peaceful world; she was also selected in 2007 for the British Academy of Management Fellowship for South Asia and the Middle East which identifies and supports scholars with exceptional potential and trajectory from the Middle East. Dr. Jamali is also winner of the AUB Teaching Excellence Award in 2006, which recognizes outstanding educators from across the AUB campus.

She worked as an expert consultant for the United Nations on Social Policy and CSR as well as various projects funded by the World Bank, the US Agency for International Development, and major private and public firms across the region. For the past five years, she has been championing the UN Global Compact Network for Lebanon and working with leading firms from the private sector to advance the Sustainable Development Goals (SDGs) and UN 2030 agenda in Lebanon through practical national social and environmental projects.